A statue of the director of a Newcastle theatre company – made using innovative 3D-printing technology – is to be placed in the Great Hall of Newcastle Castle.

Catrina McHugh MBE, the artistic director of Open Clasp, will be one of only 25 women nationally to be celebrated with such a statue as part of the Put Her Forward project.

The Put Her Forward project, organised by Heritage Open Days, encourages people to nominate women who have inspired, changed or empowered their communities.

The 25 women chosen – from a range of ages and backgrounds – have been scanned and printed into statues. The project commemorates the 100th anniversary of women over 30 getting the vote.

For over two decades, Catrina McHugh has worked with marginalised women in the north east, and used her experiences of listening to and learning from these women to help create new plays.

Open Clasp’s play Key Change, for example, was made in cooperation with inmates from HMP Low Newton. Key Change has won awards, been praised by critics and been seen by thousands of people as a result of tours and screenings.

Catrina said, “I’m very honoured by the statue and I think it represents all of us and our strengths and our fights against oppression.”

“We are a small women’s theatre company and we’ve achieved big things and I’m extremely proud.”

“There are more statues of goats and mythical female figures than there are of actual women and this selection of women chosen is quite remarkable.”

The deputy leader of Newcastle City Council, Cllr Joyce McCarty, said, “In my role as a councillor, I’ve been involved in the work we’ve done to celebrate the 100th anniversary of some women getting the vote and I’m delighted to be here celebrating Catrina’s achievements.”

“This project which offers representation of these 25 women is remarkable and I’m delighted because we need things that represent women who do incredible things in their communities.”

(The featured image shows Catrina McHugh in front of her 3D-printed statue.) 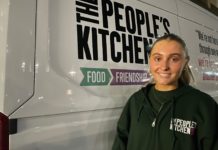 Psychology Student Volunteers at People’s Kitchen to Help Others