A study has found that large quantities of global-warming gases could be escaping from melting ice on Greenland.

An international team of researchers camped in Greenland for three months over the summer, analysing meltwater running off the island’s ice sheet.

They found that six tons of the greenhouse gas methane passed through their small measuring site alone. That’s equivalent to the amount of methane produced by 100 cows.

The methane is created by tiny microorganisms that live under the ice and is brought to the surface by fast-flowing rivers.

As global warming causes more of the Greenland Ice Sheet to melt each summer, it is likely that more methane will be brought to the surface and released into the atmosphere, further intensifying the global warming process.

Methane is a greenhouse gas that is 20-28 times more potent than CO2. Some of the methane from under the Greenland Ice Sheet, however, turns into CO2 when it emerges.

The study’s findings may also be of help to scientists investigating glaciers on the frozen planet of Mars.

Dr Jon Telling, who lectures in geochemistry at Newcastle University, said, “This pioneering study confirms the presence of microorganisms that produce methane beneath the Greenland Ice Sheet.”

“Going forward, this study may be helpful in designing strategies to search for life under Martian glaciers and ice-caps, following on from the recently reported discovery of a subglacial lake under the South Ice Cap of Mars.”

The study’s lead author, Guillaume Lamarche-Gagnon from Bristol University’s School of Geographical Sciences, said, “Whilst we knew that methane-producing microbes likely were important in subglacial environments, how important and widespread they truly were was debatable.”

“Now we clearly see that active microorganisms, living under kilometres of ice, are not only surviving, but likely impacting other parts of the earth system.”

The researchers feel that – as Antarctica holds the largest amount of ice on the planet – there would be strong grounds for similar research to be conducted there.

In addition to methane escaping from Arctic ice sheets, another global warming threat comes from methane being released into the atmosphere from previously frozen soil in melting permafrost.

The researchers’ findings have been published in the journal Nature.

The Endeavour Partnership Urging Local Businesses To Support ‘A Way Out’ 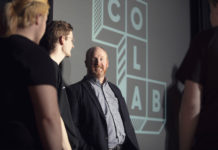 Colab Launching Careers For Young Individuals In The Creative Sector